Last week, New Yorkers for Constitutional Freedoms reported that it was unlikely that Obamacare would be repealed and replaced by the September 30, 2017 congressional budget reconciliation deadline. Since that time, one last attempt at health insurance reform has surfaced in the U.S. Senate.

The latest effort at health insurance reform is known as the Graham-Cassidy bill. Graham-Cassidy can be properly classified as a partial repeal and replacement of Obamacare. On September 20, a spokesman to Senate Majority Leader Mitch McConnell (R-KY) announced that Leader McConnell intended to bring the bill to the Senate floor for a vote during the week of September 25. At this time (September 20), Graham-Cassidy includes a variety of provisions that New Yorkers for Constitutional Freedoms supports. Those provisions include: 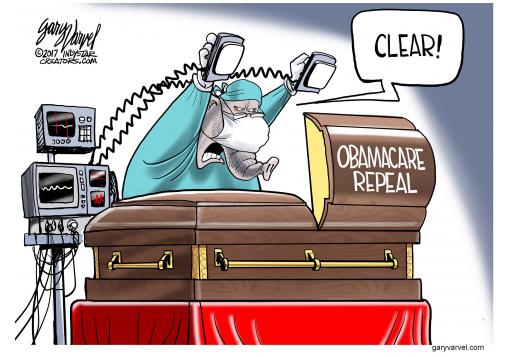 NYCF does have some concerns about the Graham-Cassidy Bill. First, we would prefer a complete repeal of Obamacare, which this bill is not. Second, the bill fails to repeal Obamacare’s expensive regulations on essential health benefits, although it does allow states to apply for waivers of those regulations. Third, if the bill results in fewer healthy Americans purchasing health insurance, it could have the unintended consequence of causing premiums to increase for everyone else. Fourth, we are concerned about the potential impact of the bill upon persons with pre-existing conditions.

In spite of our concerns, NYCF supports the Graham-Cassidy Bill in its current form as of September 20, 2017. While the bill is not perfect, it represents the nation’s last, best chance at an alternative to Obamacare in the near term. If the bill undergoes significant changes, we may reconsider our position.

Like other health insurance reform measures before it, the Graham-Cassidy Bill faces an uncertain fate in the divided U.S. Senate. While President Donald Trump supports the bill, and while one of the bill’s co-sponsors, Sen. Bill Cassidy (R-LA), has stated that 48 or 49 senators support it as well, there is concern that the bill may not have the votes to pass the Senate. Senate Democrats are expected to unanimously oppose the bill; this means that the bill needs the support of 50 of the Senate’s 52 Republicans to pass (in a 50-50 vote scenario, Vice President Mike Pence would cast a tie-breaking “yea” vote). As of this writing, Sens. John McCain (R-AZ) and Rand Paul (R-KY) have already announced their opposition to the measure, and moderate Sen. Susan Collins (R-ME) has said that she is “leaning” towards opposing it. Sen. Collins and Sen. Lisa Murkowski (R-AK)—each of whom voted against the “skinny” Obamacare repeal measure in July—must both vote “yea” for the bill to pass. Even if the bill passes the Senate, House Republicans—many of whom are moderates—will then have to pass it as well.

NYCF strongly urges Senate Republicans to stick to their pro-life principles as they negotiate the Graham-Cassidy Bill. Sens. Collins and Murkowski are pro-choice, and are supportive of Planned Parenthood. It is possible that Senate Republicans are being pressured to remove pro-life provisions from the bill in exchange for these two senators’ support. For several reasons, giving in to this pressure would be disastrous. First (and most importantly), it would be morally repugnant for Senate Republicans to renege on their commitment to defund Planned Parenthood. Second, the national pro-life backlash against Senate Republicans would likely be irreparable. Third, some pro-life senators would likely withdraw their support for the bill, making it impossible for it to pass.